Nakatani Etsuko says her father rarely spoke of the day that the world’s first atomic weapon killed 140,000 people in his city of Hiroshima, Japan.

But she says he did mention one thing: “That there were so many dead bodies in the river, you couldn’t see the water.”

Etsuko’s father was a teacher in Hiroshima. He was out of town when the bomb fell on Aug. 6, 1945. But he returned to the city the next morning to check on his school.

It was gone. All 319 students were dead. He couldn’t save anybody, but Etsuko says he stayed to help cremate the bodies and collect the bones to give to the parents. 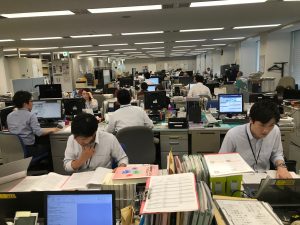 You’re going to work yourself to death. You’ve heard that before. It might sound like an exaggeration, but maybe not if you live in Japan.  Many Japanese are working such long hours, they’re literally putting their lives at risk. But some employers, along with the government, are paying attention.

In Japan, sexual harassment isn’t a crime. Women who say #MeToo are targets.

Journalists and activists in Japan created a new hashtag to show solidarity with sexual assault and harassment victims: #WeToo. But even with this Japanese spin on the #MeToo movement, change may be hard to come by — in part because sexual harassment is not a criminal offense in Japan.

Megumi Yokota is one of 17 Japanese citizens who Japan maintains were abducted by North Korean agents between 1977 and 1983. North Korea has acknowledged kidnapping 13 Japanese people in order to teach Japanese to North Korean spies. Five of the abductees returned home in 2002. The others were said to be dead, including Takyua Yokota’s sister.

Atomic bomb survivor Shigeaki Mori has spent much of his life trying to get recognition for 12 American airmen who died alongside tens of thousands of Japanese after the atomic bomb was dropped in Hiroshima 73 years ago.

Xiyue Wang, has been imprisoned in Iran for nearly two years. He’s an American citizen and a graduate student at Princeton. He was doing archival research in Tehran when he was arrested and charged with espionage. He was sentenced to 10 years in prison.

While Puerto Rico slowly recovers from the destruction of Hurricane Maria in September, hospitals on the mainland are dealing with some of the side effects of that destruction. They’re struggling with a shortage of intravenous fluids directly linked the hurricane damage.

Hua Qu has not seen her husband, Xiyue Wang, since April 2016, when Wang left for Iran. He was doing research in Iranian archives for his dissertation. Wang, 36, is a PhD candidate at Princeton studying Eurasian history.

Rising Seas Are Washing Away Graves In The Marshall Islands

Chris Balos remembers first learning about climate change when he was in high school. At the time, he was living in Sacramento, and it felt like someone else’s problem. But that changed when he started to read about rising sea levels in Facebook posts from friends and family.

Battle Over Future of Education Far From Over, Lawmakers Say

As expected, the tug of war between school choice advocates and defenders of traditional public schools played out in Arkansas’s 91st General Assembly, which concluded its flurry of lawmaking last week. To read the full article go here.

In the storm over how much money the federal government spends on student aid, and the spiraling amount of federal loan debt graduates face, Hillsdale College is an oasis.

That’s because the Michigan school, founded by Baptists, doesn’t let its students take any of that government aid, which comes with strings attached—among other things, requiring that institutions follow federal regulations governing how to respond to sexual assault and banning discrimination based on sexual orientation. To read the full article go here.

While most students in New York struggle with the Common Core-aligned assessment tests, none are struggling more than New York’s special education students.

Last year, only 7 percent of New York City students with disabilities scored “proficient” or better in English and 12 percent in math, and statewide there were at least 190 school districts in which not a single special education student was proficient on the third-grade language arts test.
To read The Hechinger Report article go here.

When It Comes to Negotiating Salaries, Women Face Traps That Men Don’t

SUSANNE SMITH, A 28-YEAR-OLD WEB DEVELOPER at a company in Boston, generally likes her job. She gets along with her boss, enjoys her co-workers, and appreciates the convenient location. But one day after work, while having a beer with three male colleagues, she discovered that even though two of the men had the same job as her, they were making almost double her salary. That’s when her perspective on her job changed. To read the full article go here.

Women are just like men, only cheaper. At least that’s what the statistics say, with women earning 79 cents for every dollar a man makes. In Boston, women do a little better, making a few pennies more on the dollar. The city of Boston is taking a novel approach to closing the pay gap.

As protests against institutional racism gain momentum across the country, they’re becoming more coordinated. While student movements differ from school to school, organizers are sharing their tactics across the country.

There’s a new film festival in town, but it requires headgear. The Kaleidoscope VR Film Festival has been touring North America and wraps up in Austin on October 14. I was one of the 400 people who checked it out when it came to New York.

Most people can’t imagine living without smartphones or the Internet, let alone without electricity. But even today — even in the United States — there are still people who live without lights and refrigeration. Many are Native Americans living on tribal reservations.

For a Boston surgeon and marathoner, this year’s race is a chance to move on

A year after the Boston Marathon bombings, long-distance runner and trauma surgeon David King remembers what it was like to cross the finish line and then start another marathon of life-saving surgeries.

‘War of the Worlds’ turns 75. Could it happen again?

75 years ago, a Martian invasion in a small New Jersey town caused mass panic throughout America. We all know now that it wasn’t real, of course. It was Orson Welles’ legendary radio broadcast of The War of the Worlds. You may not know, though, that its impact continued to sow fear and havoc around the world for years.

Egyptian expats in the US feel chaos from afar

A day after the court ordered the release of the former Egyptian dictator Hosni Mubarak, police arrested the spiritual leader of the Muslim Brotherhood, and nearly 900 people died in clashes in one week. For expat Egyptians who are following the developments far from home, its especially disturbing.

More rain equals more mosquitos… and more potential to be infected by the diseases they can carry. But some communities in Massachusetts are taking a proactive approach to fighting these pests.

The Bells of St. Michael the Archangel: A Ringing Tradition Continues in England

For hundreds of years, the residents of Chagford, a quaint town in Devon County, England, have heard the sound of bells coming from the church in the center of town. That’s because a group of multigenerational bell ringers are keeping a tradition alive that dates back to the 1400s.

“The Freelancer’s Bible,” a mammoth guidebook on how to enjoy a successful freelance career, serves as an orientation for what author Sara Horowitz calls the “federation of the unaffiliated.” A champion of independent workers, Horowitz writes, “It’s important to realize that freelancing is its own animal, entirely different from regular paid work, with its own mindset and methods.” To read the full article go here.

When it’s helpful to tune out the truth

A mother finds a lump in her breast while in the shower. It doesn’t hurt, and she has to get breakfast on the table and go to work, so she ignores it.

A husband goes to the hospital to have a total knee replacement. While there, he shows signs of alcohol withdrawal, but when the doctor asks his wife if he has a drinking problem, she says he hardly drinks at all.

These are examples of denial, a common defense mechanism that is often misunderstood, according to psychiatrists. In extreme cases, such as when a woman denies signs of breast cancer, the results can be deadly. But more often, a healthy dose of denial helps people endure and process a disturbing reality they or one of their loved ones are facing. To read the full article go here.

Put a gecko on a level piece of glass and it might slip all over the place. Tilt that glass about 10 degrees and it will stay in place. This is because the gecko’s grip is triggered by gravity, a recent discovery made by scientists at the University of Calgary and Clemson University in South Carolina and published in Proceedings B, a biological research journal. To read the full article go here.

You may not be able to trust your mortgage broker, your car salesman or your congressman, but you can trust your doctor.

Patients might well ask themselves this question when they learn that 94 percent of physicians have “a relationship” with the pharmaceutical, medical device or other related industries, according to a national survey of physicians published two years ago in the New England Journal of Medicine.

It is unclear how much those businesses spend on marketing overall, but Integrated Medical Systems, a research firm, estimates that pharmaceutical companies spend more than $20 billion annually marketing directly to doctors. To read the full article go here.

Large orange koi still swim in the pond in what used to be known as the healing garden at the former Whitman- Walker Clinic site in Arlington County. But the clinic’s name on the side of the building has been painted over, and some of the only remnants of its former use are two white LabCorp boxes next to the entrance, empty except for a few manila slips that state “No specimens in box.”

The clinic, which served the Northern Virginia HIV/AIDS
community for more than a decade, closed this year because of financial constraints.

Two blocks down the road, at 5015 Lee Hwy., a clinic has opened to take its place, the sixth site of the Inova Juniper Program, which offers health care to people infected with HIV. The other clinics are in Springfield, Dumfries, Manassas, Mount Vernon and Reston. To read the full article go here.

Dental Crowns Can Be a Royal Pain, Not to Mention a Sign of Aging

You probably don’t feel like royalty when your dentist says you need a crown. Though you might feel as if you’re paying a king’s ransom.

Dental crowns, also called caps, are expensive, from several hundred to several thousand dollars, with insurance typically covering only part of the cost. The dental crown procedure can be temporarily painful and cause localized swelling. The crowns require multiple visits to the dentist. They can break or fall out. When done right, they can protect a smile for decades; when done wrong, they can be a real nightmare. To read the full article go here.