On My Wedding Day, Wishing I Looked Like Someone Else

The morning of my wedding, I woke up looking grotesque.

I could hardly open my eyes because my eyelids were so swollen. In despair, I called out to Damian, my soon-to-be-husband. Then we called my doctor, who said, “Looks like your bone marrow transplant came to your wedding.”

I had received a bone-marrow transplant several years earlier, which vanquished the leukemia in my blood and saved my life. But my new immune system sometimes went haywire. Submerging myself in the hotel bathtub the night before with a moist, fragrant washcloth over my eyes had probably been a bad idea; it likely vexed my sensitive system.

Or maybe this was caused by stress? It hurt to look at myself. Why did my body have to go rogue today of all days?

Last Night In Arkansas: What it was like waiting for death with one of the four men executed by the state in April.

Just before his execution in Arkansas on April 24, Jack Jones ate a final meal of fried chicken, potato logs with tartar sauce, beef jerky bites, three candy bars, a chocolate milkshake, and fruit punch—or at least that’s what was reported in the news. But it’s not true.

According to the only person who sat with Jones as he waited to die, what he really ate was a small serving of the potato logs and a melted chocolate shake—an account confirmed by the official internal affairs log of the execution. There was no chicken. Jones asked for it but didn’t get it.

“He had a very small last meal that was rushed. He was being told every few minutes to hurry up,” said Morgan Holladay, who served as Jones’ spiritual adviser in his final days—an end-of-life relationship permitted to death row inmates by Arkansas law.

I received a diagnosis of acute myelogenous leukemia in my mid-20s, and after five months in the hospital and a year in medically required isolation, I felt like an old lady, fragile and tired.

Then, slowly, I got better. I’m healthy and in my 30s now. Like many young adult cancer survivors, I’ve lived life out of order. I already know how the story ends.

It’s weird being both young and old at the same time. Sometimes people remark that my eyes twinkle, how lovely! But it’s just the way light reflects off the plastic lenses inserted during cataract surgery, a surgery I needed because of long-term steroid treatment.

Walking the same sidewalks as the Tsarnaevs

As I-was-there stories proliferated across the Internet over the weekend, those of us who live on Norfolk Street wondered what to make of the fact that we actually were there, that we have been living on the same street as the Tsarnaev family. What in years to come will we say about sharing sidewalks with the Boston Marathon bombers?

Because by Saturday morning, it was as if nothing had ever happened here. No police presence. No international media camped out at the end of the street. The only remnants of Friday’s crime scene were a few police barricades pushed against a brick wall.

Universal-Coverage Law: A ‘Miracle’ That Helped Save a Life 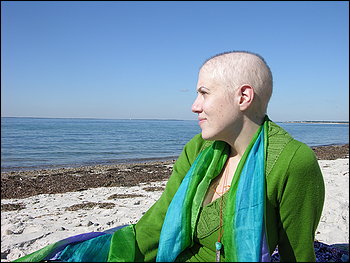 When I tell the story of my illness, I often tell it in terms of miracles. In 2007, at age 26, I was given a diagnosis of acute myelogenous leukemia and told that without treatment I would live six more weeks. The disease proved resistant to chemotherapy, but a transplant of blood stem cells was successful. A miracle. Six weeks after the transplant, I came down with viral meningitis, and though it left me skeletal and barely able to walk for a while, it did not kill me. A miracle.

But perhaps the greatest miracle of all was that shortly before I found out I was sick, I had moved to Cape Cod, Mass., to intern at a radio station and work as a coffee shop barista. I had no medical insurance when I received my diagnosis, but miraculously the state’s watershed universal health-care law had recently gone into effect. And since I was not making much money, I qualified for the state’s public option. 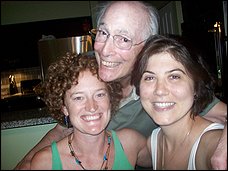 The first things I noticed about Kerry Lutz were her bright, red, curly hair and her relaxed, tomboyish attitude. I liked her instantly. We have a lot in common, I realized. We’re both 28, single and talkative. I’m you and you’re me, I thought as we stood face to face. She’s in the Peace Corps in Nicaragua, and I’m a reporter interning at The Post. But she asks a lot of questions, and I love peace and travel.

Kerry and I also represent two sides of the same coin. I was 26 when I received lifesaving stem cells. She was 26 when she gave her stem cells to save a life.

Disease, like disability, is one of those flukes. Somebody contracts AIDS after a single passionate fling; somebody else gets hit by a car and is instantly paralyzed. And me? Two years ago I was given a diagnosis of acute myelogenous leukemia, a malignancy of the bone marrow, and I was saved by the stem cells of a stranger. Kerry was the stranger who saved someone else’s life.

Confronting Life or Death at a Young Age 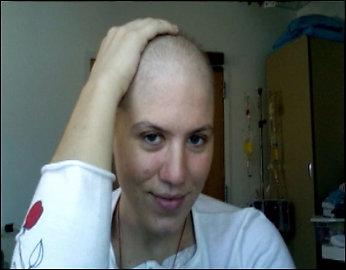 It was in the summer of 2007, a month after I turned 26, that I received a diagnosis of acute myelogenous leukemia, a fast-growing cancer of the blood and bone marrow. Without treatment, the doctors told me, I had six weeks to live. With treatment, I was still going to have a hard fight — a fight I took on, but not without reservations. Three months into it, after three back-to-back rounds of chemotherapy had failed to put me into remission, a stem cell transplant was my only hope.

The decision to go through with that transplant was a hard one. The numbers were stacked against me: I had only a 10 to 30 percent chance of surviving, and if I did, my future would be different from the one I had imagined for myself.